Of Johnny Mathis, Stamped Hands and a Good Meal... 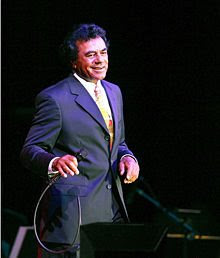 My aunts took me to a concert by Johnny Mathis yesterday, which was staged at the Casino Rama, in Rama, Ontario. The town of Rama is about one-and-a-half hours away from Toronto. Everyday was pretty surprised I knew who Johnny Mathis is, and even more surprised I could sing along. I was thrilled, because, erm, I thought he was...dead... 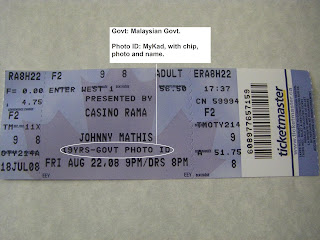 I don't carry my passport around because I was advised against it, since it would cause a lot of problems if I dropped it. And since every other office/organisation here accepts my MyKad as proof of identity (anything which has my name and face together), none of us thought it would be a problem...

Unfortunately, according to the International ID book they had at the casino, they only showed the Malaysian Driving Licence!

I showed them my MyKad, but they wouldn't accept it because they said I could have copied and made it myself anywhere. And since the only thing they had in the book was the driving licence, they would not accept anything else!

Which is quite dumb, because the MyKad comes with a chip, while the driving licence is so much like a piece of high-class paper that is laminated!

I explained to the security guard about the sequence in the IC (YY/MM/DD), and then realised the book explained that Malaysian ID numbers have that sequence! Since driving licences carry the MyKad number as well...

She dismissed me completely!

Anyway, the security guard barred me from entering, and she called her superior, which was pretty crude. He came, said it wasn't in the book (MyKad), and said I wasn't allowed to enter, there would be no discussion, then just left.

We weren't happy, since we came all the way, and like my aunts said, we were going for a concert and were not entering the casino to gamble, and morover, they were being ridiculous to say that they only accept the driving licence or passport! Especially when I produced quite a few cards that showed my name/face/age...


They demanded to see the even-bigger-superior who came about 10 minutes later.

My aunts explained to him what was going on, and that it was quite obvious we were here for clean fun since I was accompanied by 3 'older' ladies (2 aunts and a grandma), all holding a ticket to a Johnnay Mathis concert...

He told them they only had seen the driving licence, and after a while, he asked to speak to me alone.

He told me he understood that international students are cautioned against carrying their passport because of security issues. He also asked if I had other cards with me, and I produced my CreditCard which he swiped and which showed my name.

Then he casually flipped through some files while (even more) casually asking me questions:

Officer: "How old are you?"

Officer: "That's enough for me. You don't have to carry your passport anywhere else, but if you go to another casino, bring it along, ok?" 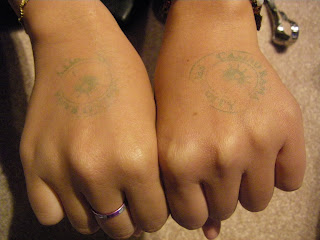 He stamped my hands to show my ID had been checked. I asked that both hands get stamped in case one washes off ;)

So, yay! Johnny was splendid, despite his age! We were in the ninth row, which was pretty cool. He sang his hits like 'Gina', 'It's Not For Me to Say' and my favourite, 'Chances Are', and also crooned songs like 'When I Fall in Love' and 'Moon River', and when he hit the last "...Moon River and me", I could feel my goosebumps doing a jig...

Was pretty disappointed he didn't sing 'Wonderful! Wonderful!' and 'A Certain Smile' though...=( 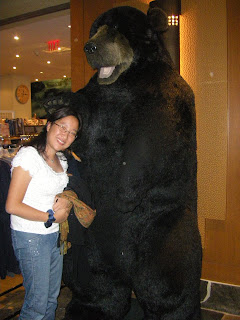 But, all's well, that ends well...Had a good time anyhow...They were just doing their job...Not that I looked underage! 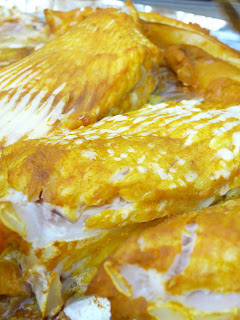 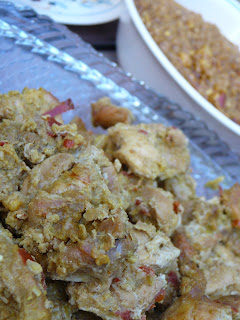 My Aunt's unskewered satay, and sauce, which tasted heavenly...Even for someone who doesn't exactly like satay, like me... 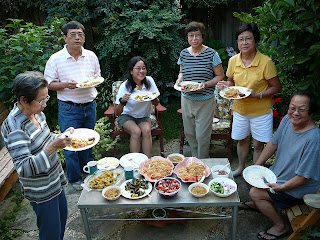 It was a good meal...The only thing missing was Mum, Dad, and Bro...But having aunts, uncles, cousins and grandma here makes home a whole lot closer...

Anonymous said…
That was a lucky thing your aunts stood their ground, otherwise you would have missed out! There is no point to be so rigid with the rules especially whne an ID is produced and in your case you were accompanied by much older adults.

IT goes to show how ignorant these north americans are. They think the drivers lisence is THE ONLY kind of identification that is existing and that all countries follow that. They diddin't consider that other countries have differnet forms of ID.

Salt N Turmeric said…
thts so weird. i never brought my passport anywhere and even before i got my local ID, i just used mykad and they accepted it. i think it all started w the first guy who said no to u and the others just dont wanna look like theyr 'questioning' his decision.

Dalam Dakapan Ibu said…
Daphne,
Take it positively - you look young! I was 20 when I went to Vegas. The casino security ppl still didn't believe that my housemate and I even after we showed them our IDs. That means we looked younger than our age ma..hehehe...

Anonymous said…
Aiyo, next time you go out some place where you need to show ID, make sure you wear some heavy make up that will make you look old, and wear some granny clothes! Heheh.

Such a hassle, just to go watch Johnny Mathis sing! But good thing you aunts demanded to see the whoever was at the top of that chain of command!!
25 August 2008 at 02:12

Anonymous said…
aiyerr...even I get this "you look underage" look! heheheeheh!!!

take it as a compliment!

Wow! You pi tengok Johnny Mathis? You are a sentimental young girl.

All the kerfuffle about your age? Ha ha...compliment lah tu. But, hey, look on the bright side, it does look like you are in a safe country, Canada. Their implementations of rules & regs are no nonsense eh? They do mean what they say! Respect.

Kerp (Ph.D) said…
shouldnt that be a compliment to you? for looking younger than 21? hihi...

hey, ther were being strict but from the way you narrated it, i thought they were not so polite after all. but you put it, all's well ends well and eventually you managed to catch johnny mathis...

Nightwing said…
Good stuff in being able to see the show.

Should take it as a compliment that u look younger then ur age..:)

But i understand at that moment, sure get the blood boiling..cause already bought tickets and stuff.
25 August 2008 at 20:11

Guess there are people here who break the rules? Maybe that's why they have such strict and rigid rules? Or could be they're just very professional lar...

Actually, the first person who said no was the 'lowest' in the rank. The other two were her superiors. I just didn't like the first lady who was very aksi lar...

As for getting to go in, thank God! Otherwise, I would be writing a very bad review...

Glad to finally get to talk to you yesterday. After so very long! Wait...Hopefully one day we would get to meet...

Pak Zawi said…
Daph,
Now I believe you wen you say you look much younger than your age. Love Johny Mathis too. Is it another coincidence?
26 August 2008 at 08:08

Hehe...Yeah lar, compliment lar, but at that point in time.

The concert was cool! It is just so different watching something live and hearing it without any modifications.

Haha. If I get all dressed up with heavy make-up and granny clothes, after they think I'm playing dressed up, then how?

But yeap, I've got aunties who won't let you step on their heads. They know their rights!

If even you get mistaken as being underage, with your 3 cute boys in tow, then me how ar?

As for the rules and regulations here, yeah lor. Very strict.

The bikes that you see here (IF you see them), are mostly the bigger variety, ala Harley Davidsons (or wannabes)...

The first two were not that polite. They were polite in tone, but not in mannerism. I call it the 'I'm-not-that-high-up-the-ladder-but-I-like-to-berlagak-syndrome'...

The last guy, whom I think is the highest of the lot, was darn polite though...In all aspects...

Yeah, now can laugh about it lar...But at that moment, the blood was memang boiling like crazy ler...

Paid money and went all the way, you know!

Unknown said…
Daph, how are you ober there now? Judging from the pics you are are having fun.

I have a friend whose daughter is interested in getting a scholarship in Canada. Could you contact me at my email regarding this? Please!