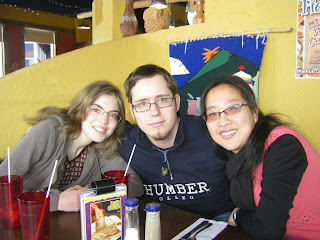 From left: Laura, Andrew and me...


I have had a pretty nice week. The snow was falling, but it wasn't too cold...Just nice, in fact...

I've been busy trying to get my work together. The whole flu episode has not been fun. I missed half a week of classes, and when I did manage to go to classes, I was still too tired to actually get anything done. So I had a backlog of assignments and readings! When I managed to finish the backlogged ones, I was behind in the recent ones...*Smack head*

So anyway, I finally found some time to just dump everything and go out for a nice lunch with some friends over the weekend, to kinda celebrate 2 birthdays, one belated and one early. We decided on a Mexican restaurant called MexiCali Rosa's Cantina & Grill. I tell you, I felt myself coming alive when I walked in: The smell of the peppers and grill can really wake you up! 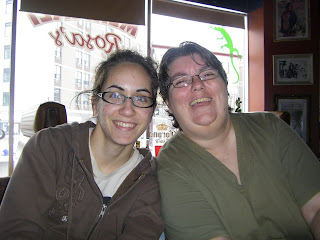 From left: Nika and Andrea, who weren't in the first picture.


And then we visited an arts-and-crafts store where we had a nice time looking at the hand-carvings and 'homemade' quilts and teddy bears. And then we did the 'boring' stuff, where we got groceries. Hehe...Got some fresh strawberries and other fruits, some yoghurt, muesli and milk...

Grocery shopping should be boring, but it was nice to just hang out with friends and argue over which strawberries look fresher. Basically, it was just nice to just go out, and not have books or any other nagging commitment!

She needs no introduction!

And a few days ago, I had my first session volunteering at the local library in a program that encourages parents to sing and story-tell to their children. It's called the Parent-Child Mother Goose project (PP-CMG)...One of my professors who studies children does research on this (the effects of these sessions on the parent-child relationship) project, and she introduced it to me.

And I felt sooo at home there! The children (about 10 of them) were all tiny, ranging from 10 months to about 2 years old. Gosh, I miss being around the tiny ones, and today, it just felt so good!

And so it was, I spent the whole morning singing nursery rhymes...One of the mums brought 2 kids- a toddler and a baby-so I got a child of my own to sing to. I got the baby, who was such a darling. It was just so relaxing to hear her laugh and giggle in glee as we did the movements!

I can already see how much it can improve the parent-child relationship. All the rhymes and songs involve touch, actions and movements of some sort.

The parents were also taught stories which they could tell their children. The interesting thing was, the stories were told with the major parts of the story (like characters, places, actions etc) accompanied by American Sign Language.

I am really going to enjoy this program! The 12 weeks will pass like a breeze...=)

Anyway, I gotta go...Going for brunch and then it's time to hit the books again!

Anonymous said…
glad you got to enjoy yourself girl. it is def not fun to catch the flu i caught it once when i was studying in the states many years ago.

the new project you are volunteering in sounds great. we should introduce it to malaysia too. hope you come back soon so you can introduce it :-)
1 February 2009 at 18:28

Unknown said…
Found your nose eh? hahaha :D
parent sing along children...man that sounds cool. They have such effort to actually encourage people over there to get involved with their children in their learning development, and at the same time to get more close to each other. Talking about killing 2 birds with one stone :D
2 February 2009 at 07:14

Anonymous said…
HI Daphne, i just love reading your blog. Never left a comment before though..

If only we had such a programme in Malaysia. U know my 3 year old refuses to go to nursery coz it is so restrictive, so much emphasis placed on writing and reading...

Had to place her in another preschool.

All the best in your education and do keep blogging.

Anonymous said…
EXCEPTIONALLY COOL THIS PROJECT! GLAD YOU ARE ENJOYING YOURSELF!
3 February 2009 at 12:13

Sorry.. I sort of.. missed your birthday.. 2nd day of CNY I was busy getting pissed with builders ruining the tiles to my window :(

But glad you had some form of celebration even though you said you weren't going to have anything at all.. which I thought would be a pity..

WC an me went to a volunteer party yesterday and we got lucky! We won a 1989 Vintage Bollinger for the lucky draw! No idea what it is la.. but everyone else was like 'uhhhh... Vintage Bollinger' and an older uncle there said it's a very good expensive champagne and should be kept for our wedding so I figure I got a good deal :)

Okie dokes.. I will catch up with you.. soon.. Sunday? Hopefully :)

And I hope you have great fun with the singing/story telling classes with the kids thing.

I used to go with Maxie to a local church for the same thing. And we had quite a good time except that Maxie was a little too young to interact with the other children..

Thanks for coming by...

Aiyo, in Malaysia, we always complain about getting the flu when it's usually just the common cold. Here, they take the flu very seriously!

As for the PP-CMG, it sure is great! You can see how the parents and the kids enjoy themselves so much, and how they bond over simple songs they can do together...
13 February 2009 at 22:25

I know what you mean about the effort! I was worried at first people might not show up because it potentially sounds so silly, but hey, people come!

And what's more, it's not just mothers...Even fathers come, and they will readily tell you how much it has helped them! Sometimes, both parents come...

I have been visiting schools here for the past few months. And I tell you, I am so surprised at how different our systems are. The classrooms here (I have only visited till Grade 6, which is kinda like our Standard 6) are so alive!

There's art and crafts of the kids everywhere, there's toys and picture puzzles and story-corners. Some classrooms have pet animals; children can bring their soft-toys to school; and everything is just so...alive...

I wish I had a classroom like that growing up...

Thanks for the comment. I think the program is really cool too! And yeap, most definitely enjoying myself...

Haha...You didn't forget my birthday! I got the parcel nice and early...

My birthday went by in a blur though...Classes from 9am till 9pm...

Some friends said we needed to go out and have a meal or something, but with that kind of schedule, the only thing I wanted was to crawl into bed, snuggle under the sheets and snooze...

Re the champagne, I don't drink, so I'm really not the best person to make any comment. But since everyone said it's a good one, keep it for your wedding!

As for Maxie, I really don't know...How old was he when you left?