Of Summer, Rats and Stews... 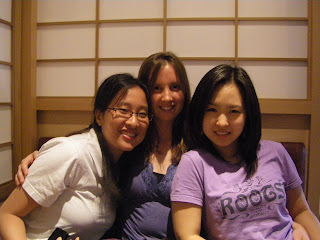 From left: Me, Angie and Irene, at a sushi restaurant, treating ourselves after finishing a mountain of work...

Instead I'm reading many books (none of which I actually want to read), about 10 metres away from the pool, and trying to make sense of a bunch of numbers and graphs I really don't care much for. The weather has also been a little temperamental, judging by the number of times I got rained on, despite checking the weather forecast...Truly Canada!

Despite doing slightly less volunteer work over the summer (schools are closed, for one, so no puppet shows), I seem to be a whole lot busier. Guess the whole compressed summer class is just taking a toll on my mental resources...

Lab work, although a whole new world, and alot of fun, comes with its downfalls as well. After a hullaballoo just last week, where I unfortunately, ended in tears in the lab (my soft spot for animals just could not handle the animal shocks*) and was subsequently removed from the lab for the day by LCP (leng-chai prof), it's turning out to be pretty interesting.

I guess LCP has different dynamics in the lab to handle when his assistants are females and when they're males. The females for example, name the rats ;) and coo at them, and they also get teary-eyed (I'm not the first, I later found out) when the rats have to undergo surgery, are the slightest bit uncomfortable, or when they get euthanised...

*The shocks, LCP has assured me are not traumatizing to the rat, as they have been passed by the ethics council, and because he himself, and all his assistants have to undergo the shock first prior to administering it to the rat (everybody says it feels like slight static)...


On a lighter note, I've found a new hangout in town (well it's not new, but I've never been there) that seems to work fine for having a cup of coffee, a pot of tea, and for my friends and I to just hang out all day reading and doing assignments. It's a cafe-of-sorts that always smells of fresh coffee and something toasting, which is fine by me! 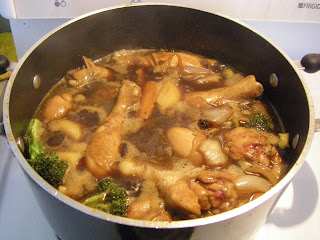 
I also seem to have perfected the art of cooking some kind of stew, and what goes into the pot depends on my mood. Lol. I don't even know what exactly it is called, but my Persian-Canadian housemate is enjoying it, and we have actually found a dish we both definitely agree on.

We both eat what the other eats, but we end up always having to compromise on one thing: Level of spicyness. It's always not spicy enough for me, and too spicy for her, so we end up compromising so it's at her threshold, but enough I can taste it!

I have already introduced her to Maggi's Chlli Sauce (and her family too, because she took it home with her, and now they're hooked), and imagine how funny it was when she came home from the weekend and brought another bottle to add to my stock (she was so excited, proclaiming she had a gift for me)!

Haha...Oh, how I miss Malaysian food!

Clarisse Teagen said…
Dear Daphne. .
I see someone is doing as the romans do. . . :)
Why don't you try cooking laksa? Someone tipped me to go to those chinese looking grocery shops to get the ingredients for it. :D
19 July 2009 at 10:16

Anonymous said…
Oh no I would cry too if I had to see any animal uncomfortable Daphne ! LCP better get use to it we can't help it if we feel more strongly for others! Hey your cooking looks good, is making me hungry and let me know when I can come by for lunch. lolzz
20 July 2009 at 12:49

Dalam Dakapan Ibu said…
The girl is bz as usual! Getting better in cooking, aren't you?

Haha...I am not a very big fan of laksa...I will eat it, but not to the extent I slave in the kitchen to cook it! Lol...

I have very sensitive taste-buds, and anything too salty, sweet (unless it's chocolate) or sour, I don't fancy much...

Thanks for coming by...

Yeah, I know a few of my friends who would tear up too. They're so helpless, animals!

I don't get it. If you think it would ruin my summer, why would you make such a statement?

It's like seeing a short man, and you assume he's concerned about it, and so you go to him and say, "hey man, I don't mean to ruin your day, but you're short"...

Hehe. Not busy by choice ar...If I had my way, I would be lazing away doing nothing and sleeping half the day!

No choice la, have to study...