The Last Lecture: “We cannot change the cards we are dealt, just how we play the hand”... 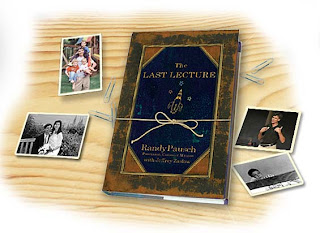 “We cannot change the cards we are dealt, just how we play the hand.”

I recently bought the book 'The Last Lecture', a book based on the lecture "Really Achieving Your Childhood Dreams", Dr. Randy Pausch's last lecture (on the 18th of September, 2007) before he passed away from pancreatic cancer. Dr. Pausch was a tenured faculty at the Carnegie Mellon University (CMU).

At CMU, some professors are asked to imagine if it was to be their last lecture, what will they want to pass to the student body and the world. For Dr. Pausch however, it wasn't something he had to pretend-play with, as he had terminal cancer.
He lost his battle to cancer on the 25th of July, 2008.

I however, still recommend the book, as it chronicles the emotions that went along with the lecture, the preparation, and the different struggles that Dr. Pausch faced. This was something that sometimes was forgotten when you watched the actual lecture as he is brimming with enthusiasm, energy and zest. And it's really something to hear the words that you just read echoed back to you by the man who said it.

It really made me think.


I wish the late Dr. Pausch's wife, Jai, and their three kids, Dylan, Logan and Chloe the best of their future ahead.

Nightwing said…
Hi there, its a great book...being meaning to buy it. Thanks for sharing it.

Not sure what to say if given a last lecture...for me topic probably range from politics to future of our young generation.

How the present gen are creating more problems then solutions for our future gen.
15 July 2010 at 11:49

Oh no is right!

Wai Wai said…
Hi Daphe, I also got hold of the book last 2 weeks, watched the last lecture, inspired and cried like nobody business.
4 August 2010 at 05:36