Comparing Education in Psychology: "Visit a strip club (male or female) and observe the behaviour of both the dancers and the customers"...


Hmmmm, that is pretty much a standard statement that I get when people hear my major. You know, truth is, if I could read my own mind, I would actually be very ecstatic ;). 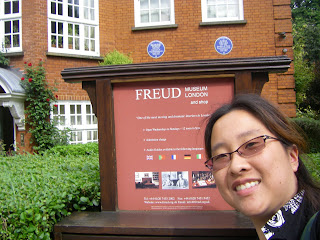 At the Freud Museum in London, England: He's inescapable in Psychoanalysis, Psychiatry and even Psychology.

Ok, news flash everyone. We don't read minds. We also don't use crystal balls, read tea leaves, tarot cards, and neither can we predict the future.

And while we're on the subject, yes, it is a Science. Something which many people don't seem to get.

Another common perception is that Freud is the God of Psychology. News flash again. No, he isn't.

While we cannot run away from Freud because many of his writings is applicable (not in every single way), Freud is inherently more relevant to the Psychoanalysis and Psychiatry.

And while we're at it, yes, Psychiatrists are medical doctors (and Psychologists are not, unless they also went to medical school).

How much exposure to research is there? How much emphasis is put on Statistics? How much hands-on experience do students (if they choose to) get if they want to be part of a research lab?

In one of my relationship classes, we had to role-play asking your not-very-cooperative partner to use a condom. We also had to then discuss with the professor and the rest of the class what possible answers did we encounter when trying to persuade another to wear a condom.

I turned to the guy I paired up with (who happens to be Malaysian!) and the both of us said the same thing: Would this happen back home?

This was only a relationship class. I think some people would die if it was the Human Sexuality classroom.

One of the professors of one of the sections gave assignments that would probably never have seen daylight in Malaysia (e.g., Visit a strip club (male or female) and observe the behaviour of both the dancers and the customers--a written paper was expected of the visit). Of course, students were given a choice and nobody had to do an assignment they were uncomfortable with.

What about research? We hear alot in the press about the need for Malaysian researchers and scientists producing world-class research in all fields.

My question is, how much exposure are students given to this? To produce world-class research, I'm guessing exposure to and experience with research has to start as early as possible, and the undergraduate years are the best time to start.

I'll be the first to admit that I've learnt the most when I was inside a research lab, because you finally get to put into practice what you've only seen in textbooks and heard from professors. Even when I was doing very simple work (inside the lab), it felt great to be able to have hands-on experience!

I'm also a self-professed hater of anything math-related. I despise math. With a lot of passion. The only part of math I ever could stand was Statistics, simply because it had diagrams (think graphs) and I am a visual learner, among others.

But too many a math teacher killed my tolerance of Stats.

When I heard I had to do Introductory and Advanced Stats as part of my Psychology degree, I almost cried.

I took Stats while I was in Inti Penang (I was told I would have to do it in Canada again anyway because a couple of the components of the Stats course was different, but I took it anyway for background knowledge), and Oh My God, I feared and hated it.

I never understood any of the principles, and ended up just memorising to get through.

When I took the similar-but-not-exactly-the-same course again in Canada, I told the professor point-blank how much I feared and despised it. And I remember how she would give me the reassurance that I was doing ok, and God bless her, use as many examples until I got it.

And I remember how her face grinned from side-to-side and how she pumped her fist when I got my A. And I remember getting the biggest hug (yes, from a prof!).

And I realise, you know what (don't tell my profs that, I still like groaning about it), it's not too bad.

In fact, a small part of me is beginning to like parts of it again.

I guess it makes a whole lot of difference when you have your own data to play with. A research project in which you get to see how the results pan out, from data you helped collect.

I remember a particular stats component that completely escaped me because I never got the head-or-the-tail. And I told one of my supervisors about it when she asked how my stats was coming along. She actually pulled out the chair, and said: "Sit, I'm going to teach you right now. I'll make sure you get it before you leave this room".

Amazingly enough, I got it. And simply because she used data and examples we were collecting ourselves.

And it really helps your critical skills when you have to decipher the data, explain the data so that someone outside the field can understand it, find loopholes in your own work and explain it (now, that's new! you actually have to tell people where your project is weak), and suggest future directions of the work.

And one of my professors is amazing with providing feedback for your work and academic writing, which I am extremely thankful for.

Would I have overcome my disproportional fear of Stats if I was doing my degree locally? I don't understand how a course which is so similar can be so different in how I face it. Is it the teaching method?

I know many people fear Stats.

So, if you're majoring in Psyc and fear Stats, have you?

I would love to hear opinions or other experiences, whether or not you're majoring in Psychology!

awarasaii said…
daphne,
i study business and also taken a few courses in psycho in a local university. it was boring!! all we study was learn from the textbook and there discussion is very little. i did not have statistics and i did not to see a lab. could it was it because i am business student?? stirp club. he he. i sound like fun. u did go?
5 August 2010 at 23:23

WP said…
I've found that having a good (or bad) teacher can really make you like (or dislike) a subject. That's why teaching techniques are important...
6 August 2010 at 09:20

Mina Jade said…
Daphne,
Remember a class we took with Dr. Kimura and we had a number of discussions then. Tha is as good as it gets in my experience. Other class discussions in Inti were basically silent, no one know what to comment. They usually talked about personal stuff and dreaded to get out of class soon as possible.
There is this friend who I told I was taking experimental psychology one semester..he replied 'psychology got experiment one ah? what do you do? make them go crazy and then turn them back to normal is it? hahahaha' --no comment-- ;)
8 August 2010 at 14:49

Thanks for leaving a note.

Well, I took a couple of Psyc courses in Malaysia, and there was less discussion for sure. But I guess it's the way our system works? There is more spoon feeding?

Statistics is required to graduate with a major (and minor too, so I've heard) in Psychology in all universities. It's just part of the requirement because there is a lot of research involved.

The assignment with the strip club was not my section--I happened to take the class in a different term and it was taught by a different prof.
15 August 2010 at 11:33

Yes, I definitely agree with that one! Which is why I think kindergarten and early school teachers (Std one, for example) are so especially important.

They can make or break a child's interest in education. Sometimes for life. After all, even when parents are encouraging, if the teacher is horrible and instills fear, man! Out the window it goes.

It would take another amazing teacher to reframe the perspective and attributes of the course.

If only we had more attention and resources given to early childhood education. Our best minds should be THERE, instead of sending people who have nowhere else (course, career aspirations etc) to go.
15 August 2010 at 11:39

Yeah, no comment about the absurdness of the statement. Although, the name DOES say 'experimental psychology', to be fair.

As if any ethics board would approve making people 'crazy' and then trying to treat them! Prevention better than cure, ma!

IBU said…
studying why people behave they way they do......

and i'm pretty sure this assignment is not from a course on child psychology.

a similar study, if in malaysia, as close as it gets, but less controversial to both students & lecturers (may differ between IPTS compared to IPTA) could be:

go to the "manhunt of the year finale" or "hottest female of the year contest" to be held at ...err... let's say... KLCC centre court, and observe the behaviours of the contestants, the invited audience, the judges, the photographers, the entertainment journalists, the not invited but managed to get close to the outer ring of the catwalk T stage, and the larger crowd hovering & watching from the other floors, and while you are it, observe the security guards & the cleaners too.

Even if u could read mind..don;t think u would want to.

Abt the role play thing on condom..won;t happen in Malaysia...some lecturers may be open minded...even students themselves are open minded ..but come next day...politicians will get involve.